VIDEO - 6 Ways To Use A Head Scarf For Curly Hair

VIDEO - 6 Ways To Use A Head Scarf For Curly Hair

Hello, my beautiful curly friends. It's Keziah here and today I'm going to be sharing with you six hairstyles that you can do with the head scarf.

Now these styles are going to come in so handy. I think they're perfect for last minute styles. If you don't have time to do your hair, they're great for vacation. If you're swimming, you're getting into pools are getting into the ocean and again, you don't have time to do your hair and spend, you know, the two hours it takes. I often wear my scarf during any type of vacation and it comes in so handy as I'm going from the pool and going out and just having a blast. So I can't wait to share these with you! I think you're going to absolutely love these. So let's just get right into them!
All right, so I'm starting off with a really long scarf. This is actually a scarf I would say for your neck. It's something that you would probably tie around and wear around your neck or something like that. A friend gave it to me, but it's been one of my favorite scarfs. So it's not a traditional head scarf size. So any scarf can work for this. Whatever you have just pulled that out to do the styles.
For the first style, I'm going to use my head scarf and I'm also going to use some hair ties. And I have my Snappee Hair Ties right here. I'm just snapping them together so you can see that they resemble regular hair ties. But what I'm gonna do is I'm going an unsnapped them to put my hair up so any hair tie can work for this just to pull your hair up. And so once I get it up into a puff, then I'm going to go ahead and take my scarf and I'm just going to bunch it up in the middle. I'm going to put it behind my hair, bring it up, then I'm going to tie a knot in the middle and pull it down. And then it may go in and tie a second, not so I'm double knotting this.

And then I'm going to move with the scarf to wrap it around the back and then tie it. 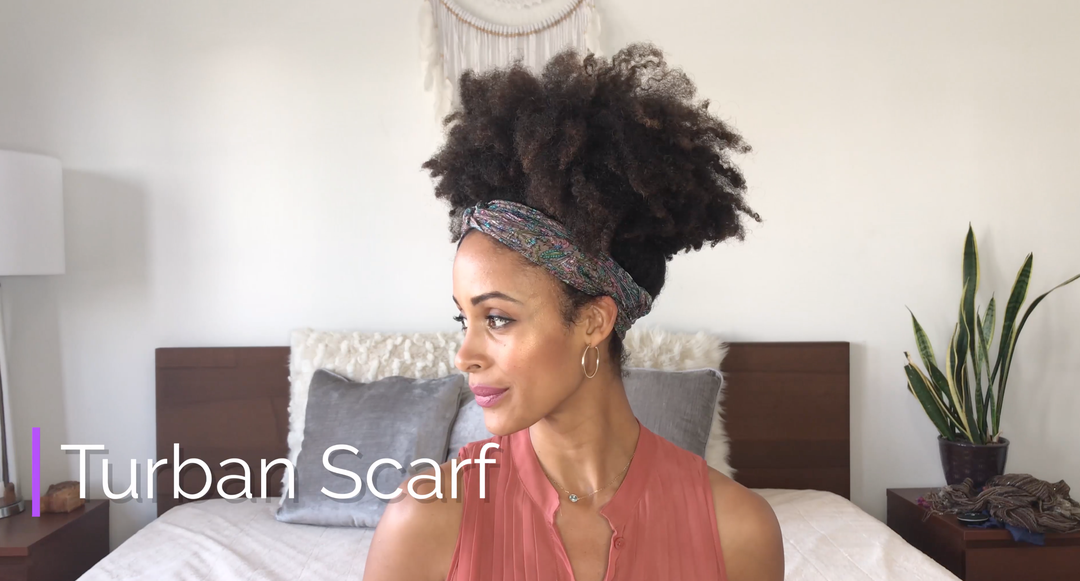 I'm just going to go in and tuck any pieces that I can't seem to tie, which is such a great thing about scars is that really it's tying and tucking that create the style and then I'll go in and adjust any hairs that are sticking out by just tucking them underneath and that style.
And this is style number two! It's like a band with a little bow or you can call it just a little button. Super cute, super easy to style and we really just dress out anything you're wearing.
This is style number three. You're going to take your scarf and you're going to fold it in half and then you want to make sure the open side is going to be towards the back of your hair and you're going to put it on your head and you're going to pull your hair down and any hair that may come off on the sides, you can leave it out if you like or you can tuck it in. Either is fine. I will leave out a little bit of these hairs just to show you how it would look if you were to do that and then you're going to just release the hair that's in the back that you, you've been holding down and then you're going to go ahead and tie a knot in the back. So the same as we were doing with all the other hairstyles. Let me just going to tie it there it and then turn around and then I'm going to hold it down here while I just kind of adjust and gather more of my hair inside of the scarf and adjust like the way that I want my hair is to lay over my ears before I really go in and settle this style.
So to settle it and you're just going to go in and tie a bow and the reason why I like the bow is that it's going to be really easy to take out at the end that you won't have to mess around with the knots and it being really tight and pulling, you know maybe your hair and then you let the sides go right here and you're just kind of adjust your hair. Keeping it over your ears I think really is what brings us style out and fluff out any extra hairs if you need to. And there you go. This is a style number three!


And then after you had tied a knot in the front, you want to make sure that it's over your ears if that's comfortable for you. If it's not, you can totally pull your ears out. I'll just show you how that might look. Your ears are a little bit more obvious, but, um, it still looks great. I like to keep it over my ears. I actually liked the feeling of having my ears tucked. It feels really nice. Now you're gonna take this and you're going to twist it at the back, which I've already done. Tie a little knot and then you're going to bring it in the front.

Let's tuck this again, comes out, and then I'm gonna pull this back cause I just want a little bit more of my hair to show. I'm going to cover a little bit more of my ears. Here we go. This style number six. It's like a side puff with the scarf. Thank you so much for tuning into this video. I'm so happy to show these styles with you that you can do easily with a scarf. If there's any other styles that you'd like to see, go ahead and comment below. If you like these hairstyles and also subscribe if you haven't to my channel. I'm so happy to do the styles for you and thank you so much for tuning in and I'll see you next time!

Just added to your cart


Enter email to Get 15% Off Your First Order & Natural Hair Secrets!